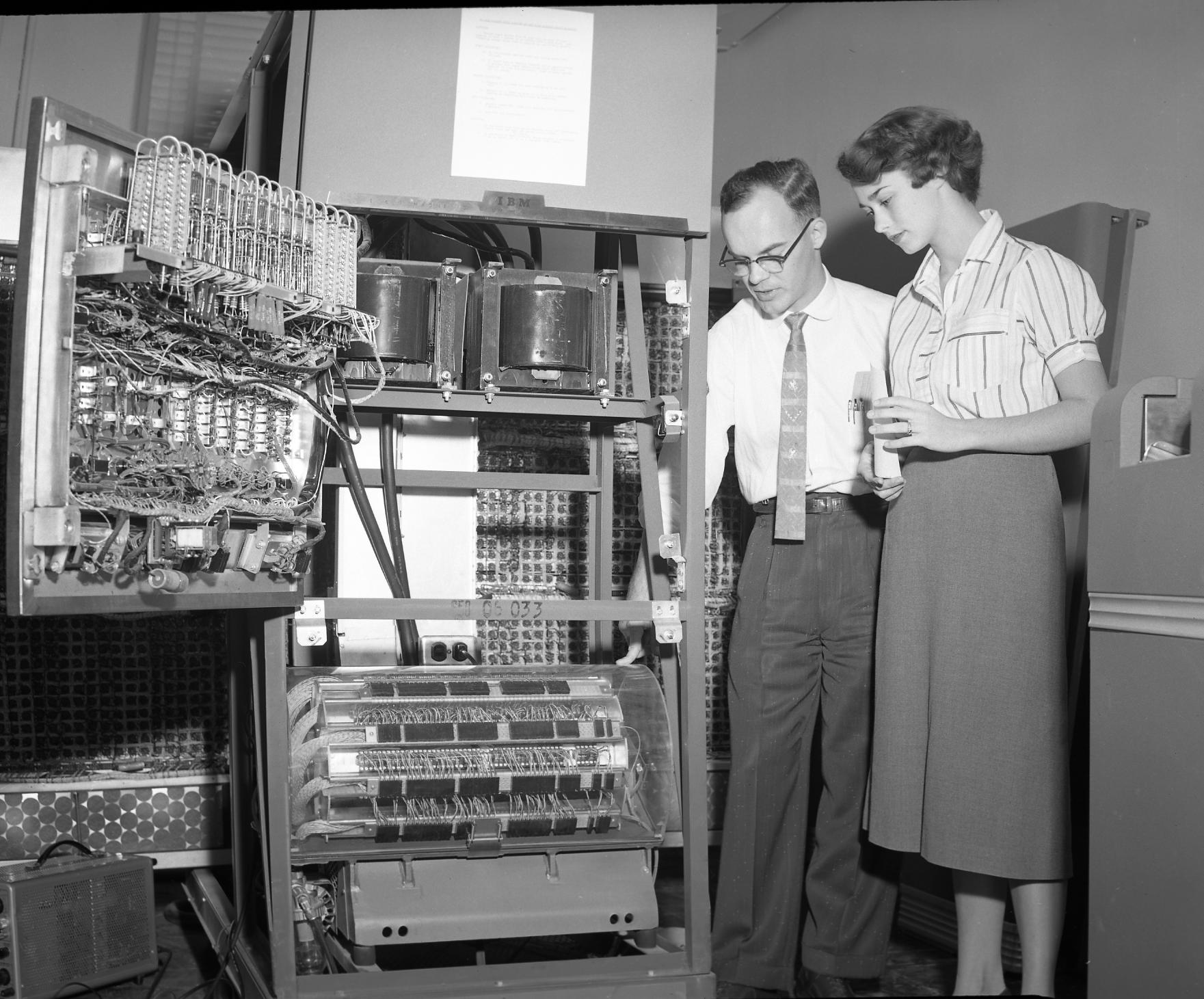 In July 1953 IBM announced the release of the IBM 650 Magnetic Drum Data-Processing Machine, and such was its success that nearly 2,000 units were produced earning it the title of the world’s first mass-produced computer.

The 650 offered the functionality of a stored-program computer that could also be used to fulfil traditional punch card requirements, enabling it to be used in a number of applications within various industries including insurance, utilities, transportation and engineering.  IBM’s first customer for the 650 was John Hancock Mutual Life Insurance Company based in Boston, who purchased a second machine just 4 months later.

Devised in IBM’s laboratory in Endicott NY, a team led by Frank E Hamilton developed the drum design which was used to store both data and instructions allowing 650 machines to carry out numerous tasks including payroll and centralised branch store accounting, customer billing and analysis of market research.  The machines were also used for missile design and to analyse data from supersonic flight tests all made possible through the 650’s arithmetic, processing and storing and read-write functionality.

The drum rotated 12,500 times per minute and featured memory that allowed 20,000 digits/2,000 words to be stored. With 44 operation codes and the ability to produce results at a rate of 100 punched cards per minute, the 650 Model proved a reliable and cost effective solution for business.  A key feature of the computer was the self-checking functionality which removed the need for a separate checking process through the error-detecting technology that IBM had developed, saving time and money for companies in the process.

The features of the 650 resulted in the machine becoming hugely popular in the 1950’s, with further technological advancements allowing the computer to be used in conjunction with models such as the IBM 407 accounting machine, and the IBM 727 magnetic tape unit for input and out-put.  The IBM 650 became known as “the workhorse of modern industry”, calculating speeds of 78,000 additions or subtractions per minute were achieved, with the machine also capable of 138,000 logical decisions per minute.

In September 1956 further developments by IBM saw the launch of 650 RAMAC with IBM 355 disk memory units combined with the 650, and a double capacity drum storage model released in June 1959.  In 1960 the last Model 650 was manufactured following the release of its successors in the form of the IBM 7070 and IBM 1620.  Clients that took the IBM 650 included the Carnegie Institute of Technology, Chrysler, Boeing, Bell Telephone, Esso, General Electric, Shell and the US Armed Forces.