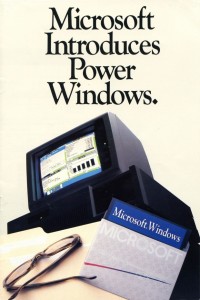 November 20th 1985 marks the 28th Anniversary of the release of Windows 1.0, Microsoft’s first version of an operating system which supported multi-tasking together with a graphic interface for PC’s.  Microsoft’s working name for this new operating system was Interface Manager, but they replaced the name to reflect the new multiple computing windows which the system featured.

Having witnessed IBM’s Visi On a few years earlier, under the direction of Bill Gates, Microsoft sought to compete with an offering that allowed for ease of use, the ability to run more applications and offer the user a greater graphics experience.  Windows 1.0 would also offer scroll bars, icons, drop-down menus and boxes amongst other features for the first time. The first public presentation of Windows took place on 10th November 1983 and was well received in terms of functionality, pricing and hardware requirements. Following the announcement, tensions grew in the coming months as the competitive market awaited the official launch, with Digital Research’s GEM and IBM’s TopView viewed as Microsoft’s main competitors.

When Windows 1.0 launched in November 1985 it was marketed with a focus on the graphics provision as well as reduced memory requirements. Following the actual launch there was a mix of reviews with the idea of an interface which was designed to be used with a mouse resulting in some negative feedback, as well as issues raised surrounding performance.

May the following year would see Version 1.02 providing for the international market, shortly followed by Version 1.03 in August which incorporated European keyboard functionality together with an increase in printer and screen drivers.

Eventually replaced in November 1987 with Windows 2.0, Microsoft continued to offer support until 31st December 2001 for Windows 1.0, some 16 years after it was launched.