As the fifth largest global economy by nominal GDP and the largest country in the European Union (EU) by area, it is little wonder that France is recognised as a major power internationally. The second most populated country in the EU overall, the commercial centre of France is the capital city Paris, the metropolitan area of which has a population of 12,292,895. Boasting Europe’s second largest economy, France is home to 31 Fortune Global 500 companies and is known for its industry, energy, agricultural and tourist sectors – all of which can, and do, benefit from effective PDF editing software. Below we celebrate some of France’s top inventors, companies and innovations: Just one of the major contributors to the construction industry from France, Joseph Monier is best known for the invention of reinforced concrete in 1867. As a gardener, he had plenty of experience with the inadequacies of the other flower pot making and paving materials of the time and set out to improve cement. Finding that steel rods or mesh could be used to increase the strength of concrete and enable it to be used in many more applications, he sought patents for the use of reinforced concrete in a variety of contexts, revolutionising building projects. One of the best known French inventors of all time, Louis Braille has transformed the lives of generations of visually impaired individuals and his invention continues to do so. The reading language braille comprises raised ‘dots’ denoting letters which can be read using touch. Based on a reading language used by the army, braille soon became a standardised language for the blind and Braille himself created a number of books on its use.

The world’s largest insurance company, AXA is headquartered in Paris. Initially established in 1816 as Mutuelle de L’assurance contre L’incendie, AXA has grown through a series of takeovers and is now established in numerous countries, offering a variety of insurances and financial services.

Based in Clichy, Hauts-de-Seine, Paris, L’Oreal is the world’s biggest cosmetics company and is globally renowned. Founded in the early 1900s as creators of hair dye, the company now produces make-up, perfume and sun protection products as well as being innovators in skin and hair care. 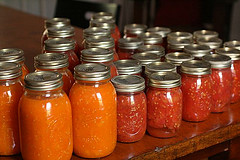 Airtight preservation has been truly revolutionary, allowing food to be stored for long periods of time in cans or in jars. The method was invented by French confectioner and chef Nicolas Appert, who provided the army with details of his food preservation method (placing foods in airtight jars and then boiling them) in 1810, after which the technique became widely used in France and then the wider world. French American Eugene Houdry invented the catalytic converter in order to help reduce the levels of dangerous smog in cities such as Los Angeles. The original converters were used in smoke stacks and forklift trucks, but Houdry also developed them for cars, transforming the motor industry for the better.